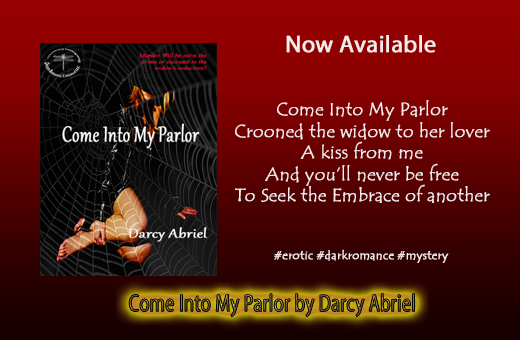 Come Into My Parlor

Murder. Will he solve the crime or succumb to the widow’s seduction?

The murder victim had been discovered naked and handcuffed to a bed. Pandora Edwina Willmington was Detective Alex Johnson’s prime suspect. He was certain she was guilty as sin. Coming face to face with the beautiful, sensual suspect fueled far different thoughts than escorting the young, wealthy widow to jail. 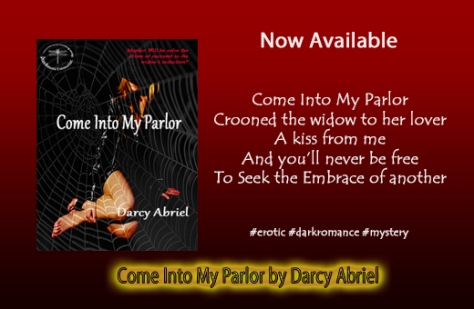 He mounted the steps and rang the bell. As he waited for someone to answer the door, he turned around to survey the well-manicured grounds. Neatly trimmed shrubs bordered the circular drive; the fountain at the heart of the lush green lawn with the naked statue of Pan spouted a steady stream of clear, bubbling liquid. It was peaceful, serene even, but Alex sensed something about the place – an undercurrent of some sort. A click sounded behind him and he swiveled back toward the entrance.

He hid his surprise as the door was opened by a young, dusky-skinned man neatly dressed in tight black pants, black silk shirt, and shining leather boots. He was a head shorter than Alex’s six-foot frame and his dark eyes surveyed Alex with curiosity.

“Can I help you?” he asked with a hint of Latin shrouding the edges of his question.

Alex whipped out his badge and displayed it to him. He waited patiently while the man studied it, attempting to size him up, figure out his position in the household. He didn’t look like the typical butler for a place like this. A creature from an old monster movie would have fit in here perfectly. This guy, no. He belonged on a movie set, or maybe in a bull ring down in Spain. But he sure didn’t belong in this setting.

But then neither did Pandora Willmington, by his estimation, from all he’d heard about her.

He handed the badge back to Alex and stepped back from the door.

“Was Mrs. Willmington expecting you?” he asked as Alex stepped past him into the marble-floored foyer.

Damn, talk about opulent. He shifted around to face the young man who looked about half his age -maybe nineteen or twenty. “No, she’s not expecting me, but I have a few questions I’d like to ask her if she has time.” He whipped out his notebook and a pen. “By the way, what=s your name and who are you?”

“His name is Arturo and he’s my personal assistant, Detective,” a husky, sensual voice that reeked fuck-me, its effect floating downward landing somewhere in the vicinity of his groin, informed him.

If he’d been anyone else he probably would have swallowed his tongue and someone would have had to call for emergency assistance when he turned to look at the owner of that voice. He should have been prepared. He felt like he=d slammed into a brick wall, and his cock rose hard and fast to attention. Nothing could have prepared him for this hot number. Nothing on this planet.

This had to be the infamous Pandora Willmington. He smoothed his expression, attempted to gain control of his misplaced lust. Mine. It was something that shouldn’t have crossed through his mind. He might want her, more than he=d ever wanted anything in his life -but he couldn’t have her. Too bad if he could taste the want, the need to feel his cock burrowing deep into her cunt. He was here to do a job.

He couldn’t help stroking her with his eyes, and his thoughts. Blonde hair clung to the silk of a satin black robe with oriental markings that draped open revealing pale flesh only superficially hidden beneath a black lace camisole. Long legs, bare, creamy, and smooth, culminated in shapely feet encased in black satin four-inch stilettos. Crimson lips, wet, pouty, sensual, kissable, a half smile of invitation, and bedroom eyes the color of expensive whiskey. Way out of his league. He licked his lips, anticipating the taste of her on his tongue.

One slender hand rested at the curve of the banister where she hovered about mid-way up the sloping staircase. Once she was sure she had his full attention she floated down the remaining steps. Arturo hurried to the foot of the stairs and waited. He clasped her hand when she reached the last few steps and gallantly guided her down to the main floor. She stopped next to him, and Alex could see the nipples of her upthrust breasts vividly outlined, pressing against the silk. His cock throbbed painfully at the front of his pants.

She turned to Arturo and brushed against his side like a female cat in heat. One of her hands drifted around to curl possessively over the hard curve of his ass and Alex saw the muscles tighten beneath the thin black material. Arturo’s eyes smoldered and Alex could almost smell the smoke rising between the two of them. He felt like a voyeur witnessing the lustful exchange – and wanted to join in. Arturo raised her hand to his lips and placed a passionate kiss on her palm. Evidence of his arousal was more than prominently displayed against the front of his tight trousers.

Pandora raised a hand to stroke the side of his face. “Thank you, Arturo. You’re superb,” she purred. She turned to gaze at Alex through slitted eyes. “I’ll handle our guest from here.”

Alex was certain he saw a flicker of something in the young man=s eyes as he released her hand. “As you wish, Mrs. Willmington. If you need me, just ring.” He pivoted around, piercing Alex with a burning, hate-filled looked before he strode from the room.

Alex struggled to remember what he was here for and turned back to study the lethal woman that dripped sex. It was a surprise to him after all this time that his previously benumbed senses allowed him to respond so strongly. His ex-wife had done quite a number on him and he=d had a hard time evincing the least glimmer of interest in pursuing another relationship. Until today.

What role did Arturo really play in her life? Had he possibly resented the appearance of Korvanti? Had he been the one to kill him in a jealous rage? That young man harbored a lot of intense emotion below the surface. Or had he followed an order from the mistress of the house by disposing of a problem she wanted gone?

Something to think about. He filed it away.